Testing Experience, Sale, and Giveaway – 5 out of 4 Eleanor Cardigan

Well, I tried something new last month…I was part of a new pattern testing group!!  I’ve applied to a few pattern testing calls in the past, but was never chosen.  That is until Jessica, from 5 out of 4 Patterns, decided to choose me as one of many testers for the Eleanor Cardigan that released today. 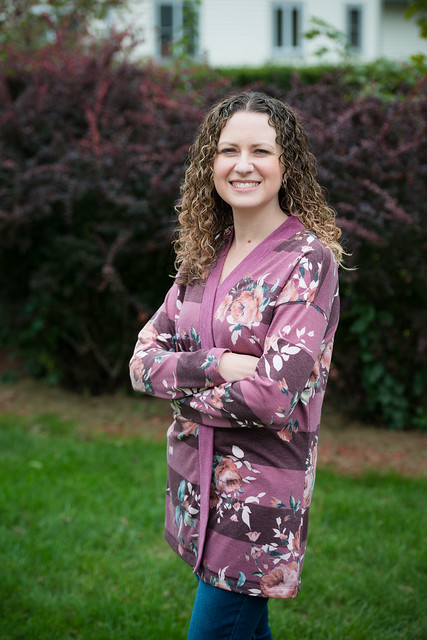 I have to say, pattern testing is not the easiest thing to do in the world.  The Eleanor Cardigan pattern is luckily an easy sew, because I ended up making three versions in two weeks!  Which probably really isn’t that many for testing a pattern.  But, for me, that is a lot since I’m just starting to have time to sew in the evenings after the kids go to bed.  I also under estimated how much fabric and paper it would take to test a pattern.  And that is after it went through pre-testing!

So, needless to say, if you are considering a pattern test for someone, realize that it’s more work than just sewing up a pattern one time.  Now, don’t get me wrong, it was still a ton of fun seeing the whole process and the behind the scenes of what goes into testing a pattern before it’s actually released.  I feel a huge sense of accomplishment as well as feeling proud that I helped a tiny bit to make the pattern successful for the designer. 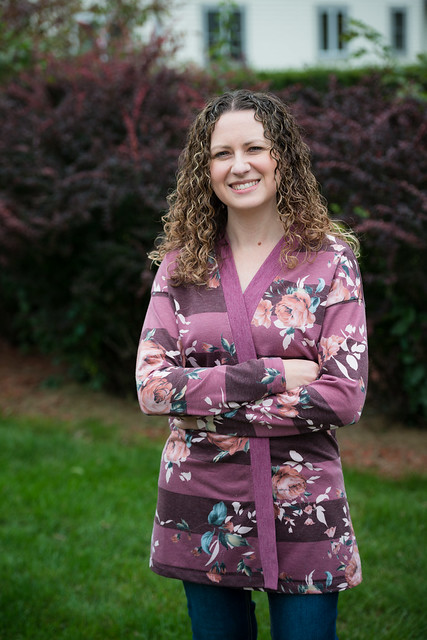 My first version is not pictured, as it was too big even though I was right in the middle of the XS for measurements.  Jessica then adjusted the pattern to an overall slimmer fit.  It is supposed to be a roomier cardigan and should overlap in the front to make the belt option look better.  I knew I wouldn’t use a belt so did not make that option on any of the ones I made.  She also made adjustments to include two sleeve widths for those that want a larger wrist opening, and others, like myself, that prefer a tighter fit around the wrist.  Those two adjustments along with a hood adjustment are the major changes that happened through the testing process. 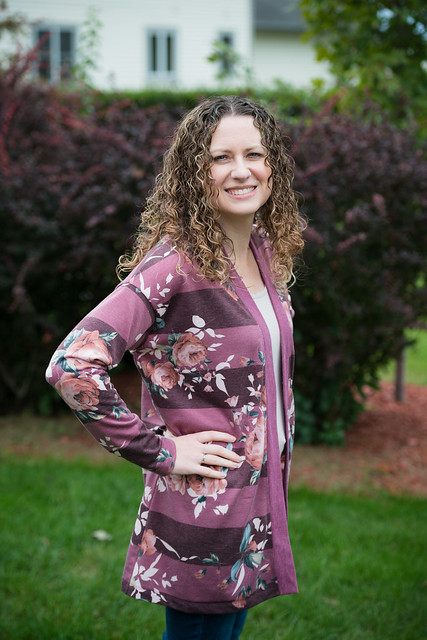 I used a poly-rayon spandex french terry from So Sew English for the above cardigan and it’s super comfortable.  I think this is one of the best stripe matching I’ve ever done and it was, of course, on a test cardigan.  Luckily, it turned out, so really, it’s now an actual cardigan that I can wear! 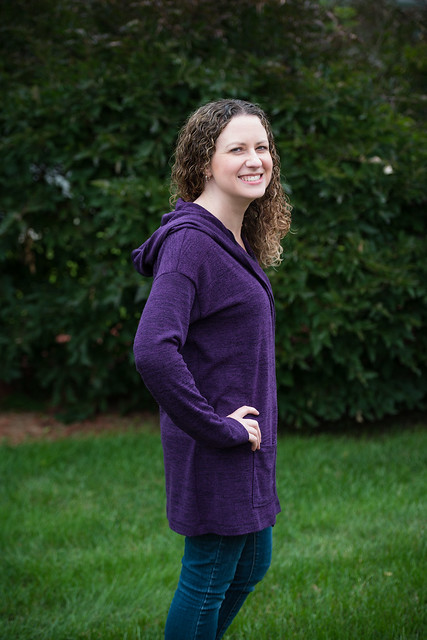 On the last version that I made (the purple) I decided to add the optional pockets and hood.  This fabric is a sweater knit from Purple Seamstress….I think hacci, but I am not 100% sure.  It must have stretched while sewing, without me really knowing, because the overall cardigan seemed longer than the striped one.  I also made many stupid mistakes when making this version.  I think I was just in too much of a rush and tired to fully pay attention to what I was doing.  It didn’t help that since I had already made two versions, I thought I knew what I was doing, so I didn’t read the instructions as thoroughly as I should have.   So you can’t really tell, but I actually sewed the hood together with wrong sides facing, so the inside of the hood is the right side of the fabric.  I probably won’t ever wear it with the hood up, so it works out ok.  I also put the band on incorrectly, but made it work out ok in the end.  I should have taken some pictures to show you guys! 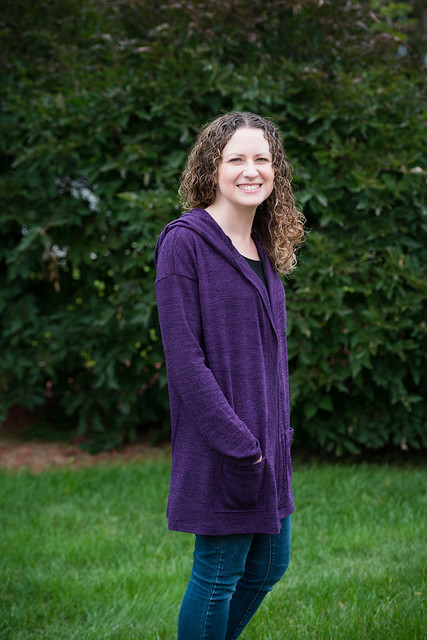 A few other options that are included are three lengths (tunic, knee, or duster), two sleeve lengths, and elbow cuffs which are really just tie sort of things that you sew in so you can roll up the sleeves to 3/4 length.  They are super cute!  Then, as I mentioned above, you can choose to do the banded or hood option, belt, pockets, and two different sleeve widths.  There is also a girl’s version if you have a little girl to sew for in your life.  Lillian wasn’t interested in having a cardigan, otherwise, I would have made her one too!  We could have been matching! 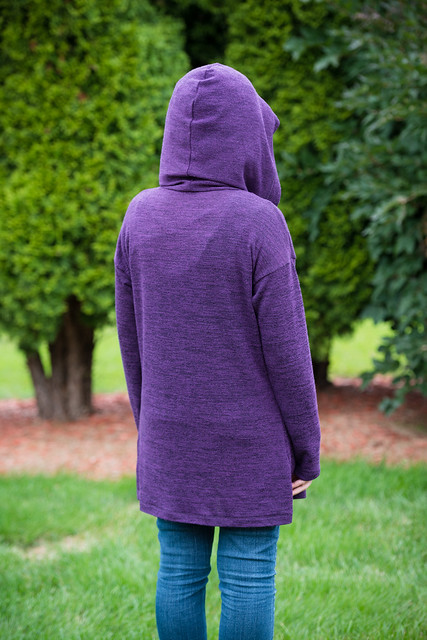 Both the women’s version and the girls’ version are on sale for $7.95 through Sunday, October 7, 2018, no code needed.  And if you purchase both versions there is an additional $2 off the bundle.  Here is the women’s pattern and girls’ pattern from the 5 out of 4 Patterns website.

Enter below to win the pattern for free.  Giveaway ends Friday night.

Disclaimer: I am an affiliate of 5 out of 4 Patterns so I get compensated for any orders placed through the links in this post.