Oh man, you guys, it’s been FOREVER!  I promise I’m still sewing, just not blogging.  I decided since my little guy gives me minimal time to do anything that I would sew instead of blog when I have some me time.  So that is what I’ve been doing.

If you follow me on social media, you have probably seen all of the pics I’m going to share.  I have made mainly clothes because I’ve found that they are pretty quick and oh so cute on the kids!  This post is going to be items that I finished in 2015!  Yes, it’s been that long.  (hiding under a blanket)  The pics are also all taken from my cell phone without the best lighting or backgrounds.  So I apologize for that, but maybe they can still inspire you to create!

2015 Halloween Costumes: Jake and Cubby from Jake and the Neverland Pirates 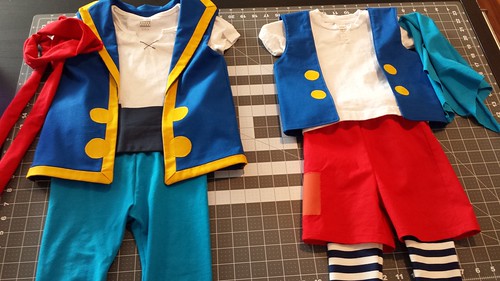 Lillian was on a Jake kick and wanted to be Jake for Halloween.  So that is what she was!  We decided that Owen would be Cubby, so they could coordinate.  I used this vest pattern as a template, but did make a lot of changes, such as cutting off the front to make Cubby’s vest have a wider opening and add a collar for Jake’s vest.  For the leggings, I used PAB’s Lollipop Leggings pattern.  The red shorts were actually the Castaway Cargos by PAB without the cargo pockets and I added an orange square on the side. 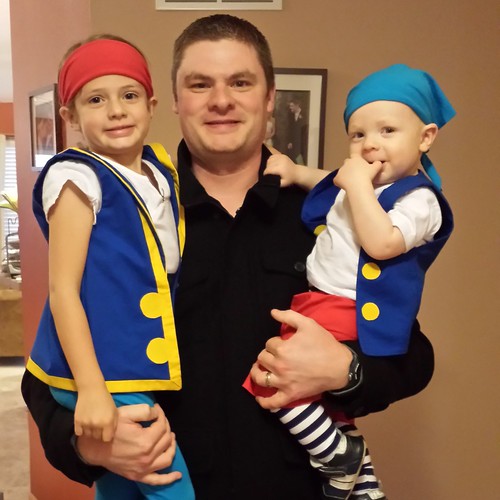 A pic taken with Dad.  This was seriously the only way to keep both of them fairly still to get a pic!  The head pieces were just cotton/lycra from purpleseamstress cut into a strip for Jake’s and a triangle for Cubby’s.  Cubby’s bandana is the same fabric as Jake’s leggings.  The fun thing about the leggings is that Lillian was able to wear them for more than just the costume.  I gave Owen’s to a friend and her daughter has been wearing them.  The white shirts were just t-shirts from the store that I cut to match the cartoon characters. 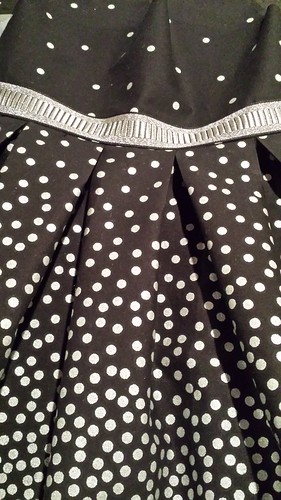 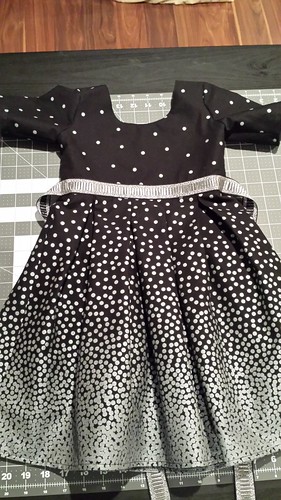 This dress is the Very Merry Party Dress by PAB.  The fabric is a silver and black border print from the collection Celebration Glitz by Michael Miller.  It’s gorgeous fabric and perfect for the holidays.  It might be a little harder to find now though.  The sash is ribbon from Hobby Lobby.

I just did a basic version of the dress instead of adding the pintucks.  I felt that the fabric did enough to fancy up the dress.  Don’t be afraid of a dress like this.  It was a pretty easy sew and being able to use quilter’s cotton is an added bonus.  It does have an invisible zipper, but if you’ve followed my blog for very long, you know that I think invisible zippers are easier to install than regular zippers. 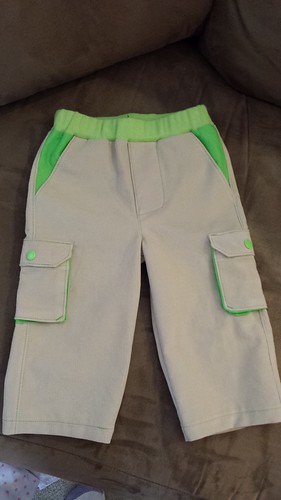 These pants are the Castaway Cargos by PAB.  I actually made Lillian a pair as well but with teal accents instead of green.  Lillian’s were way too big so they are still sitting in her drawer.  I didn’t go off of measurements and since these are naturally a wider/baggier pant they just didn’t fit right. 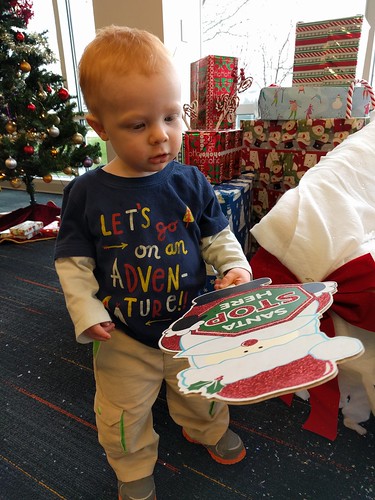 They were so cute on Owen though!  I used a thin corduroy so that they could wear them in the spring as well as the winter.  The accent is a Kona solid quilter’s cotton.  I love the details about these pants.  There is a faux fly and of course the cargo pockets on the side.  I used snaps to close the pockets instead of buttons.  You can choose to make the cargo pockets with pocket extensions or keep them flat.  I chose the extensions so that there would be a little more color peaking out. 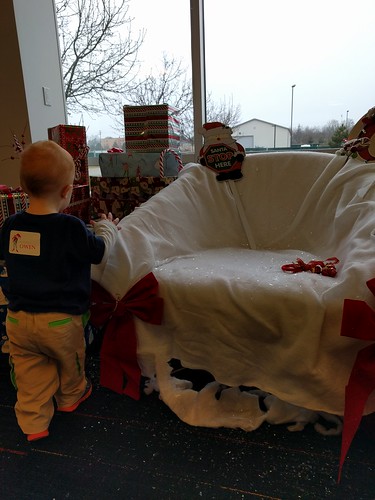 Here is a picture of the back which shows off the welt pockets.  I wish I had better pics to share with you because these pants are just too cute.  I used green thread to topstitch to add a little more detail.  This might be one of my favorite things that I have made because of the little details. 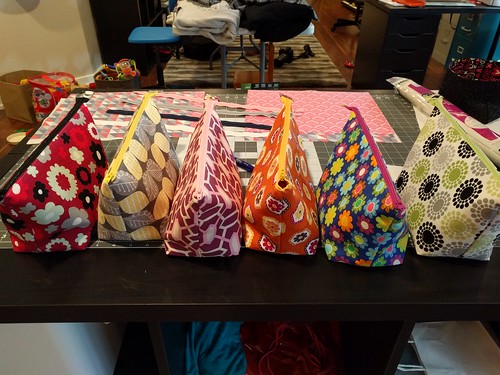 For Owen’s daycare teachers I made Noodle-Head’s Open Wide Zipper Pouches.  I then let them choose which one they wanted.  I have made quite a few of these pouches now and they are fantastic!  I still use the large one for my toiletry bag when we travel.  I need to make a few more for myself instead of using the Clinique bags! 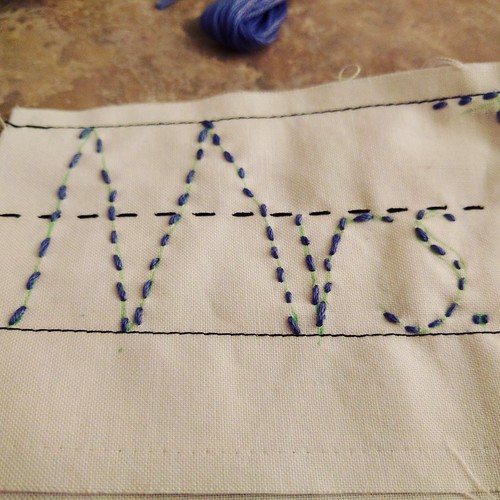 For Lillian’s teacher’s holiday gift I also made the open wide zipper pouch, but this time I made “paper” out of solid quilter’s cotton and had Lillian hand sew her teacher’s name onto it.  I then appliqued the whole thing onto the pouch before sewing it together.  I had Lillian first write her name with a FriXion erasable pen and then hand sew over it.  That way she had something to follow and when she was done I could just iron over it and the pen would disappear. 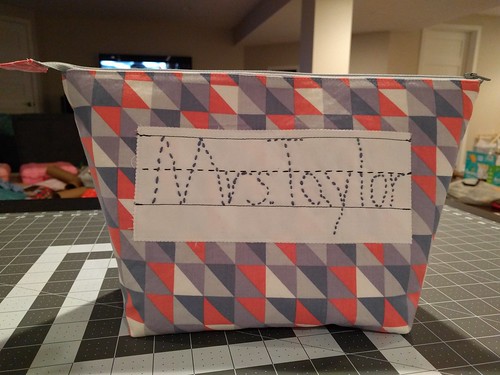 Here is the final project.  I think it turned out so cute.  Not to mention how proud Lillian seemed after finishing.  I would have had her sew the whole thing, but she wasn’t really interested. 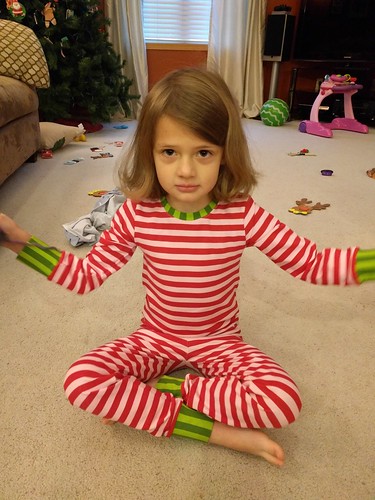 I also made the kids some Christmas jammies.  I once again used a PAB pattern….the Alex & Anna winter PJs.  Yes, I love PAB patterns.  I think everything that I have made has turned out and she has so many patterns that work for boys or girls.  I love being able to use one pattern for both kids. 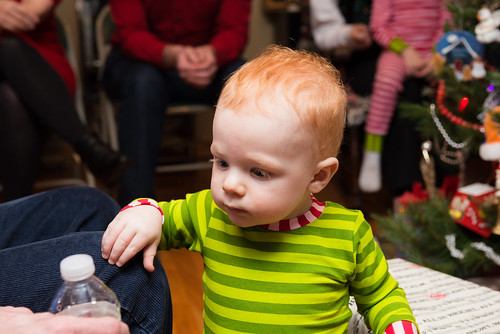 I got the fabric from Euro Girls Boutique (use coupon code sewingnovice for 21% off your order).  Actually, I just received more fabric for this year’s Christmas jammies.  I will use the same pattern because it’s comfy for the kids and a super easy sew.  This pattern is one of the first ones that I made using knit and a serger. 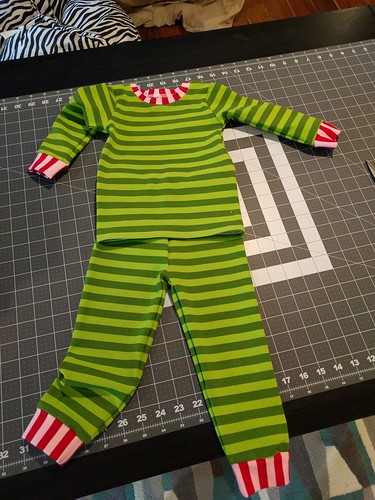 I think the kids looked like little elves in their Christmas jammies.  So cute!  Lillian still wears hers even though it’s not anywhere near Christmas.  Owen would, except he outgrew them.

So I think that wraps up the 2015 projects that I have mobile pics of.  I have a few projects that I actually have good pictures of that I will hopefully share before the end of 2016!  Eeek!  I need to get back into a better blogging routine.  Actually, just a better routine in general.

Disclaimer: I am an affiliate of Peek-A-Boo Pattern Shop and Amazon so I get compensated for any orders placed through the links in this post.